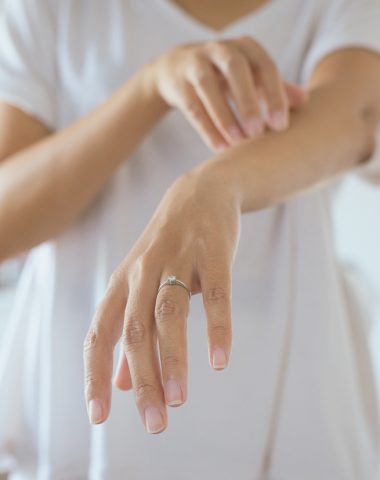 Treat The Symptoms Of Psoriasis

Psoriasis is a recurring autoimmune disorder characterized by red, flaky patches on the skin.

Even though it affects your skin, psoriasis actually begins deep inside your body in your immune system.

It comes from your T cells, a type of white blood cell. T cells are designed to protect the body from infection and disease. When these cells mistakenly become active and set off other immune responses, it can lead to psoriasis symptoms.

Even though there’s no cure, many treatments exist to ease the symptoms of psoriasis.

Approximately 1 million Canadians are affected by psoriasis. Psoriasis is a persistent skin disorder characterized by red, thickened areas with silvery scales, most often on the scalp, elbows, knees, and lower back.

The outbreaks, severity, and the chronic nature of psoriasis can make it debilitating and embarrassing for those who have the condition. It is not contagious. It can affect both men and women and usually shows up in early adolescent years. Psoriasis is often mistaken for other skin conditions such as dandruff, eczema and seborrheic dermatitis.

Plaque Psoriasis
Plaque psoriasis, or psoriasis vulgaris, is the most common form of psoriasis. An estimated 80 percent of people with psoriasis have plaque psoriasis. It’s characterized by thick red patches of skin, often with a silver or white scaly layer.

These patches often appear on the:

Guttate Psoriasis
Guttate psoriasis appears in small red spots on the skin. It’s the second most common type, affecting 10 percent of people with psoriasis. Most of the time it starts during childhood or young adulthood.

Flexural Psoriasis
Flexural or inverse psoriasis often appears in skinfolds, such as under the breasts or in the armpits or groin area. This type of psoriasis is red and often shiny and smooth.

The sweat and moisture from skinfolds keeps this form of psoriasis from shedding skin scales. Sometimes it’s misdiagnosed as a fungal or bacterial infection. The skin-on-skin contact can make inverse psoriasis very uncomfortable.

Pustular Psoriasis
Pustular psoriasis is a severe form of psoriasis. It develops fast in the form of many white pustules surrounded by red skin.

Pustular psoriasis may affect isolated areas of the body, like the hands and feet, or cover most of the skin’s surface. These pustules can also join together and form scaling.

Psoriasis is caused by an overactive immune system and is thought to be a genetic disease that is triggered by environmental factors. In a process called cell turnover, skin cells that grow deep in the skin rise to the surface. Normally this process takes about a month, but in people with psoriasis it happens in days because the cells rise too fast.